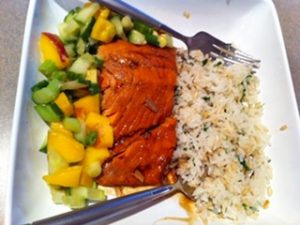 as seen in “Too Tired To Cook” (get cookbook)

I read an article written by a woman who was trying to introduce healthier foods to her family.  I think there are many parents facing this now, or have tried in the past.  She served her family brown rice, and they revolted, refusing to eat it.  It doesn’t surprise me; most of us have no idea how to prepare brown rice, and there is lots of terrible advice out there, so we just do our best.   This article will give you tips on how to get your family to eat brown rice.

You soak it for a long time before you cook it.  Read on to see how much and why.

All rice was previously brown rice.

A friend of mine was making changes to become healthier and lose weight.  He achieved a 30 lb. weight loss by reducing his carbohydrate, and increasing his fiber.  He is from Panama, and rice is a mainstay of his diet.  I asked him if he had switched to brown rice, and his reaction was classic:  “NO.  I can’t do brown rice.  I just don’t like it at all.”  His facial expression was pure disgust.

This was amusing; he is normally very open minded.  But I knew his mother and grandmother made the rice when he was a young boy.   He told me that they grew their own rice, and harvested it.   He remembers the women pounding the hard shell of the rice (the husk) with a large mortar-and-pestle type device until the hard husk broke free.  The women then sifted out the husk, boiled the rice, and they ate dinner.

Imagine my friend’s surprise when I told him that he grew up eating brown rice!   This was inconceivable; he was truly shocked and in disbelief.  As a man of science and a man with a great dislike of brown rice, he wanted proof.  We discussed what the grain of rice looks like,   After the outer hard husk is “threshed” off (the mortar-and-pestle system), there is a thin layer called the bran, and a minuscule area that contains the rice germ and rice germ oil.  Today the outer bran layer and rice germ are removed by milling to store the grain for long periods (otherwise the oil would spoil it), and dried to further extend the shelf life.  The “white” or polished rice that you buy in the grocery store is dry and hard, not moist, and does not have the bran and germ.

To prove to my friend that he grew up on brown rice, I asked him if his mother and grandmother methodically and painstakingly removed the thin bran layer and germ from each grain of rice – it would have taken hours.  He said “no, all they did was boil it” – bran and germ and all.   They did not dry it either.  I pointed out the brown rice we buy is dry – not like what he grew up with – and needs to be rehydrated by soaking, preferably for several hours.  He laughed and immediately called his wife to tell her they ate brown rice for most of their lives!

Most people have a preference as to the type of rice they enjoy.  For my family it is jasmine rice, followed by basmati.  To introduce your family to brown rice, buy the same variety of rice.  In my case I bought brown jasmine rice.

Where?  For that I had to find an Oriental grocery, and discovered they had several varieties of brown rice – short grain, long grain, sweet, jasmine, basmati – the list went on.  Now, my local big box grocery store carries brown jasmine rice.

Introducing a change in the usual foods is difficult.  Food, for many, represents much more than a way to fill an empty belly.  It carries memories, and emotions such as feeling loved perhaps.  Think birthday cake, or a holiday dinner.  There are just certain foods we expect.

But, as pointed out above, foods we now have adopted to become “ours”, even culturally, were not even eaten before modern processing.  Our great-grandmothers did not have white rice.  Just as in our example of the women in Panama, I doubt women or other workers in China, or Thailand, or Japan, or Spain, or Mexico, or Iran, or India sat around peeling rice and removing the germ.  They boiled the rice, flavored it with yummy spices and served it.   Indeed, polished white rice is a relatively new food to humans.

Back to our question:  how to introduce brown rice.  The answer?  gradually.   Just as it is hard to go from whole milk to skim milk (a difference of only 3.5% milkfat), it is hard to switch immediately to brown rice.  Start by mixing 1/3 brown rice with 2/3 white rice.  Gradually over two or three weeks, make it 1/2 brown rice and 1/2 white rice.   Lest you think that doesn’t do much, consider that now your family is eating more fiber, more B vitamins, and more trace essential minerals.  If your family is accepting the rice changes, try adding more brown.

When I asked my son (again!) if he liked the rice, he finally said “Mom, I’m ok.  I’m used to it now.  Make it all brown rice.”  Never thought I’d hear that!  Here is a picture of the brown/white rice mix with chopped cilantro and lime juice; as you can tell, we see the white rice first and that is the dominant texture. 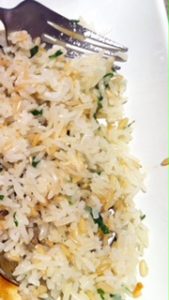 First, mix then rinse the rice.  That is to get rid of any coatings designed to keep it dry and preserved, and to discard anything that isn’t rice (I have found small stones, rarely,  in the white rice).  Next, soak the rice (we will rinse this off so it doesn’t matter how much – I add enough water to cover the rice by another inch).

Soak the rice for a minimum of 2 hours, and I’d suggest all day or even put it in to soak the night before.  Also, cover it.

When it is time to cook, drain the rice.  I use a rice cooker so I add the water that the rice cooker indicates for the amount of rice, and use the white rice setting.  That’s right:  white rice.   The brown rice has now been moistened and soaked up some liquid and it will cook about as quickly as the white rice alone – maybe 5 more minutes.

There you have it.  How to get your family to eat brown rice: buy a familiar variety, mix it, soak it, cook it, flavor it. How to make delicious brown rice that the family will find familiar, yet a slight twist.  The flavor of the brown rice is a nice nutty flavor but it will not be dominant or hardly noticeable as you a mixing it with white rice, at least initially to introduce it.  Texturally, it is very familiar.  Serve with yummy sides and enjoy!